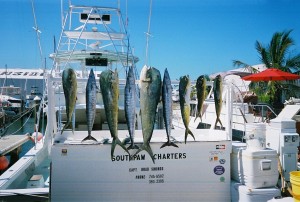 upbeat. From reading them you’d think the author never had a slow day and never failed to catch absolutely everything they were after- in huge quantities! The local chambers of commerce may appreciate these reports but fishing enthusiasts are well advised to be a little skeptical. Take the Dolphin season here in Key West as a case in point. The fact is, as of this writing – at what should be the peak of the season, Key West has had a very poor Dolphin run. The fishing has improved a little bit of late, but overall results to date have been disappointing. The number of “gaffer” size fish ( those from 10-20lbs) is down as is the size and number of the schools of smaller “schoolie” dolphin. Almost every day there are a couple ofÂ  “slammers” in the 40-50 lb range caught, which garner a lot of press, but you can spend many many days on the water before you get in front of one of these fish. Yes we are catching a dozen or moreÂ Dolphin on every trip but not as many larger fish as we’d like. On a more positive note, there have been a decent 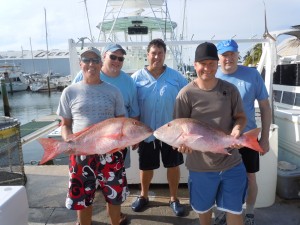 number of Blue Marlin around, we had another encounter the other day, but never got a hook in the estimated 150 pounder. AlsoÂ had a small Mako shark eat a schoolie off the hook then vanish.Â On the reef edge, the Mutton spawn is over after a week of excellent fishing, there should be another push of Muttons on the upcomming June moon