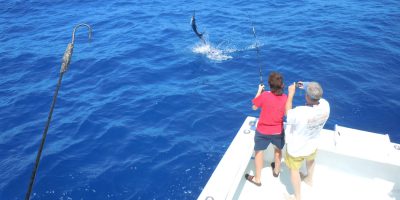 The Atlantic Sailfish is one of the most iconic game fish caught in the offshore waters of Key West. Sailfish are highly prized for their beauty and spectacular fighting qualities which include searing runs and long series of acrobatic jumps. Sailfish are the most commonly encountered Billfish in the Florida Keys and during peak season, 10 or more can be hooked and released in a single day. Key West Sail fishing is one of the most exciting fishing experiences available during a fishing charter. Sailfish are caught in Key West every month of the year but prime season includes the months of November through January and again in April and early May. This seasonal abundance coincides with their winter and spring migrations.

Aboard the SOUTHPAW, we use a variety of fishing techniques while Sailfishing to produce results, and we always use light tackle. All Sailfish caught aboard the SOUTHPAW are released to fight again another day. Beginning in November, we generally target Sailfish by trolling fresh dead Ballyhoo baits. These baits are expertly rigged to “swim” just subsurface. Combined with fish attracting natural bait teasers this setup allows us to troll at about 6 knots, cover some ground, and discover which area and in what depth the Sailfish are located. 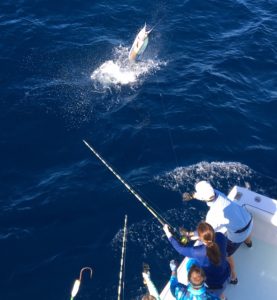 By December as the Sailfish move closer to the shallow water of the reef edge, we are catching live Ballyhoo with a cast net or hair hooks and slow trolling these live baits. During this time of year the Sailfish often move in on top of the reef and chase enormous schools of Ballyhoo on the surface.

We are alert for signs of this activity and ready to move the boat quickly into position for a sight cast. As the Sailfish season progresses we generally do more and more kite fishing which is a technique using specialized fishing kites to suspend a variety of live baits downwind of the boat. Most clients find kite fishing to be a fascinating and very exciting method of Sailfishing because all the action occurs right on the surface.

In April as the spring migration gets underway we target Sailfish by looking for a unique water condition produced by strong spring tides. The elements for this include east wind blowing against a current moving strongly to the east, and a color change of dirty blue green water pushed up against clean blue water in depths between 80′ and 250′. This is the so called “tailing condition” which gets its name from the propensity of Sailfish to stick the top half of their tail out of the water as they swim into the current along the color change.

It is hard to predict when this condition will occur, but when it does it is not uncommon to spot 30 or more sailfish in a day and release a dozen or more. The SOUTHPAW, equipped with a tuna tower, is ideally designed for this type of sight fishing. Insiders know that when it comes to Key West Sailfishing, just 4 or 5 of the top charter boats account for the vast majority of Sailfish caught by the entire fleet, and the SOUTHPAW is one of those top Sailfish producers. Let us welcome you aboard for an exciting day of Sailfishing. 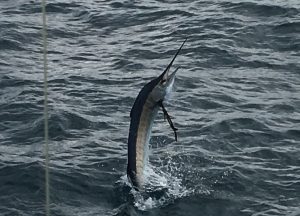