Dolphin fish, also known as Mahi Mahi or Dorado, which are unrelated to the marine mammal that shares the same name, are one of the most common and exciting sport fish encountered on a day of Key West fishing aboard the SOUTHPAW. Among the most beautiful of fish with their pattern of bright yellow, green and blue, Dolphin are present in the offshore waters of Key West virtually year round. Peak season for these great tasting acrobatic fighters is May through September. Dolphin grow to more than 50 pounds. Large male, “bull” Dolphin are characterized by the blunt vertical rise of their head, while “cows” have a more streamlined shape.

The largest Key West Dolphin are generally encountered individually or in small groups featuring a dominate “bull” accompanied by several “cows”. Smaller “schoolie” Dolphin frequently form huge schools of a hundred or more fish. Dolphin are both aggressive and curious with the result that when one is hooked, the rest will rush the boat. When you are Key West Dolphin fishing, you can expect multiple hookups. Chumming with cut bait will keep the school around the boat and lead to flurries of action as intense as any fishing you have ever experienced. 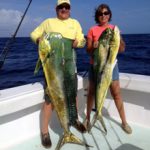 During peak season, Key West Dolphin fishing is as close as you can get to a sure thing for great fishing action. Aboard the SOUTHPAW we employ a combination of tactics which involve both hunting and trolling to produce great Dolphin fishing for our clients. Dolphin can be encountered at any time once the reef edge is crossed, so Capt. Brad climbs into the tuna tower, (where he will remain all day) and, armed with a powerful set of stabilizing binoculars, begins scanning for the telltale signs. Color changes, current edges, weed lines, floating debris and bird life are all indicators for the presence of Dolphin.

One of the favorite foods of Dolphins is flying fish, and on many days it is possible to observe Dolphin grey hounding after flying fish while frigate birds swoop from above trying to pick off the “flyers” before they fall prey to the Dolphin. In this situation, we are often casting live baits directly to the fish which Capt. Brad has spotted from the tower. Once we are in a productive area, we deploy a trolling spread featuring both natural and artificial baits. Dolphin are surface feeders so if you are watching, you will see them strike the baits. 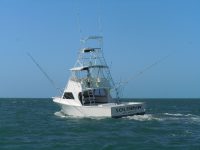 The SOUTHPAW is superbly designed for Key West Dolphin fishing, beginning with our tuna tower which allows Capt. Brad a better view (no other charter boat in Key West has a working tower), and the size of our fishing cockpit which is the biggest in the fleet, allowing plenty of room to fight multiple hookups. In addition, the speed of our boat allows us to get out to the fish ahead of our competitors. We think you will find the SOUTHPAW is your best choice for Dolphin fishing.